The Middle East has an incredibly rich history which dates back centuries. It is a region which is home to some of the oldest landmarks in the world, like the archaeological site of Petra in … 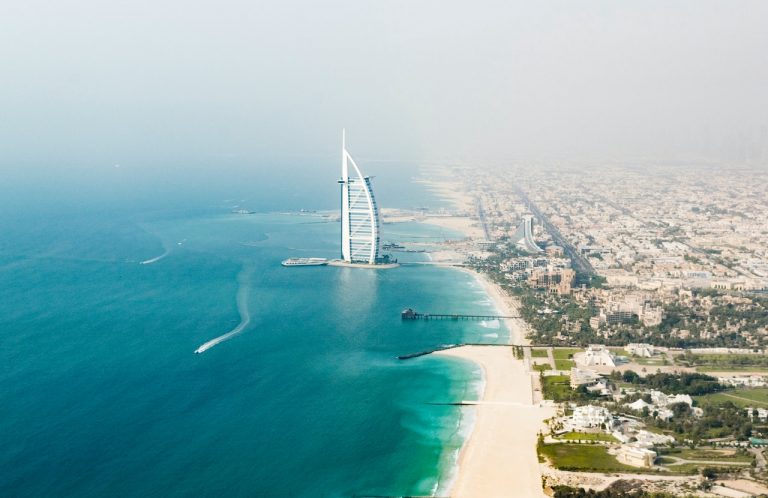 The Middle East has an incredibly rich history which dates back centuries.

It is a region which is home to some of the oldest landmarks in the world, like the archaeological site of Petra in Jordan which dates back to 300 B.C.

Alongside its fascinating history, some of the most developed cities in the world belong in the Middle East too.

These cities attract thousands of tourists every year, and it’s no surprise to see why.

Shopping, culture, music, art, food, and beautiful sandy beaches can all be found in this region.

It is also home to financial and political districts, in cities which attract more residents each year.

Let’s look further at some of the most developed Middle East cities.

Millions of people have visited Dubai and millions more dream of visiting this famous city.

Dubai has much to offer, including lavish shopping malls and a huge international food scene.

It is also home to the Burj al Arab – the only hotel in the world to be labelled ‘7-star’.

Possibly the feature which attracts the most tourists is the famous Burj Khalifa.

Standing at 828 meters high, this is the world’s tallest building.

This young but well-developed city welcomes on average 15 million tourists per year.

Many of them visit the gorgeous sandy beaches, such as Sunset Beach or La Mer Beach.

In addition to visitors, Dubai also attracts many people who choose to settle here.

Around 90% of Dubai’s population have moved there from overseas.

The financial hub of Saudi Arabia, Riyadh is one of the most developed Middle East cities.

As the capital city of the country, Riyadh is home to the National Museum and the Kingdom Centre Tower – the tallest building in Saudi Arabia.

This city has continued to grow from strength to strength in recent years, with an increasing population.

Riyadh has the potential to become one of the world’s top ten biggest cities in the future.

The capital city of Qatar is another destination in the Middle East which has undergone substantial levels of development in recent decades.

Doha is the fastest-growing city in Qatar, with around 80% of the country’s population residing in this city alone.

Doha is home to many skyscrapers, including its tallest Aspire Tower which stands at 300 meters high.

The buildings of Doha are often described as a mixture of both old and new – combining Qatar’s rich history with the newer, more contemporary styles of this region.

A central city for trade, Manama is growing as a global hotspot for exports and imports.

The skyscrapers of this city stand alongside grand mosques, some newer than others.

Manama is the home of Bahrain’s financial district, attracting thousands of workers and officials to the city.

Manama is also one of the Middle East cities where tourists can buy alcohol.

There is a nightlife scene in Manama that many people don’t expect initially.

There are plans to develop Manama even further, with ambitions for a building that will overtake the Burj Khalifa as the world’s tallest.

Culture, politics, music, and history come together in Amman to create a fantastic tourist destination that combines the past with the modern day.

Originally built on seven hills and now boasting nineteen, this city has been gradually developing since the 1950s, despite political and economic difficulties.

The development of Amman has certainly made this city look and feel very modern, with some dramatic skyscrapers and an increasing population. But it still retains its rich history including archaeological ruins and the Citadel.

The Roman Theatre has been welcoming audiences for two millennia, while the famous Dead Sea lies just an hour outside of the city.

These features combine past, present, and future to make Amman one of the most interesting and developed Middle East cities.

Whether you’re looking for your next adventure or you’re keen to find out more about the Middle East, there are many cities which have undergone substantial development.

Since this region has so much history and culture to offer, it isn’t surprising that thousands of people from other countries have decided to settle in some of these developed cities.

More from this author