Memorial Day marks the “unofficial start to summer” for millions of Americans and typically the opening of pools, beach season and many other warm-weather activities. Even though this year may look different with delayed openings in some areas during the pandemic, many will try to salvage the holiday weekend with a staycation, or at least by firing up the grill in their backyards.

Spring has been a cool and wet one across the eastern United States, preventing people from escaping to the outdoors at times during the shelter-in-place orders. However, AccuWeather forecasters say conditions may let up just in time for the holiday weekend with temperatures expected to throttle to summery levels. Others may not be so lucky as a stormy pattern developing this week will persist straight into the weekend. 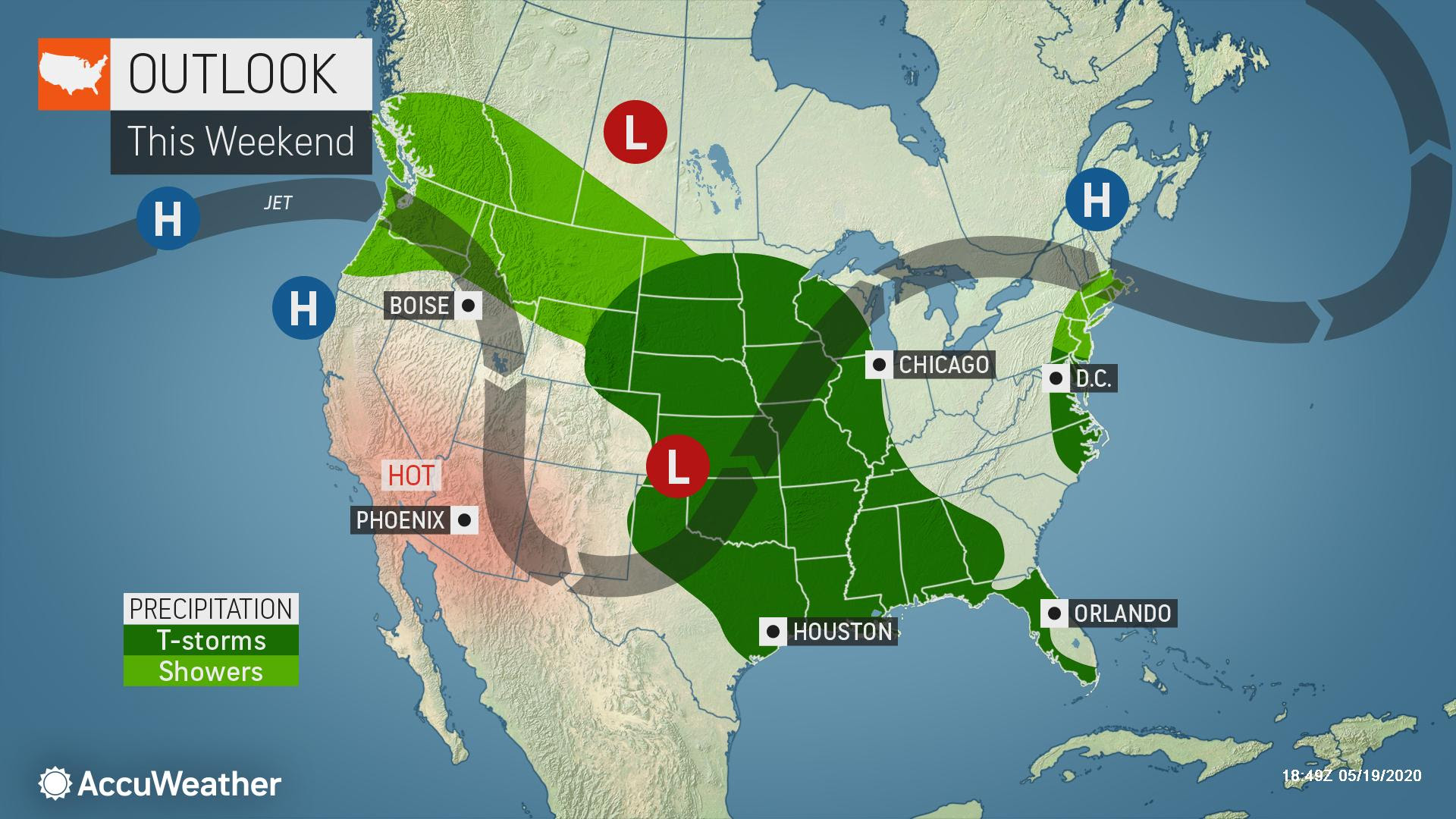 Sweltering in the Southeast

After a large storm stalls in the southeastern U.S. for a few days this week, unleashing flooding downpours on the southern Appalachians and Carolinas, a more tranquil pattern is in store for the holiday weekend.

“High pressure will take the place of a storm pestering the region this week,” said AccuWeather Senior Meteorologist Bob Smerbeck. “This will lead to overall drier conditions with expanding heat.”

Temperatures in the 80s F will be widespread across the region through the weekend and for Memorial Day itself. Interior portions of Florida and southern Georgia and Alabama will climb into the 90s. The warmth expected this weekend will be closer to normal for the actual start of summer, on June 20, rather than late May.

Combined with sunshine and building humidity, AccuWeather RealFeel® Temperatures will soar well into the 90s across much of the Deep South, and can even surpass 100 in spots away from the coast.

“Those planning outdoor activities for the holiday weekend should be careful to protect against heat-related illness,” cautioned Smerbeck.

While largely dry conditions are expected, some downpours and thunderstorms still could pop up for a few locales and dampen some holiday plans.

“The high pressure won’t be very strong, so as is the case with many hot, humid and summerlike air masses, some showers and thunderstorms can bubble up in the afternoon heat,” said Smerbeck.

Midwest, Great Lakes and Northeast to bask in pleasant conditions

Residents from the Midwest to the Northeast won’t have to wait until the weekend to start enjoying sunshine and expanding warmth.

After a slow-moving storm brought widespread flooding across portions of the Midwest, Great Lakes and Ohio Valley, high pressure will set up for the long haul, bringing expansive dry weather and a good deal of sunshine from Minnesota to Maine through this week and much of the holiday weekend.

Warmth will gradually build through the rest of the week, with widespread high temperatures in the 70s and even some reaching the low 80s by Friday from the Midwest to New England.

“The warmest areas for the holiday weekend will be north and west of New England and the mid-Atlantic,” said AccuWeather Senior Meteorologist Joe Lundberg. “Temperatures will be in the 70s and 80s across most areas from upstate New York through the Great Lakes and Midwest.”

A few locations in the Midwest and lower Ohio Valley may even approach 90 F by Memorial Day.

“Areas along the New England and mid-Atlantic coast will be kept a bit cooler by persistent sea breezes, but the holiday weekend will still be largely dry with plenty of sun.”

Temperatures along the Jersey Shore will remain about 10 degrees cooler than inland locations, topping out in the 60s throughout the long weekend. Meanwhile, the temperature is expected to reach 75 in Philadelphia on Memorial Day, right around the normal high of 77.

As warmth builds into the holiday weekend, the threat for spotty showers and thunderstorms will begin to return.

“While no major storm systems are expected through the holiday, there can be a shower or thunderstorm in places,” Lundberg said.

“The vast majority of the time will be rain-free and great for social distancing activities outdoors, but keep an eye on the sky and be ready should you find yourself in the path of a thunderstorm.”

Severe thunderstorms to threaten the Plains

Storms contributing to a cooler and wetter pattern in portions of the West this week will start to shift eastward in the Plains during the second half of this week and into the holiday weekend.

After severe thunderstorms target portions of the northern and central Plains during the the middle of the week, storms could fire up on Saturday and Sunday again. Severe thunderstorms will target the northwestern High Plains Saturday, from around eastern Montana and northeastern Wyoming into the western Dakotas.

While a few storms can also fire up in western Texas and Oklahoma and near the western Gulf Coast, people across much of the rest of the Plains will just experience very warm and humid conditions.

The muggy weather will help set the stage for what AccuWeather forecasters expect to be more widespread thunderstorms through the Plains on Sunday.

“With a strong cold front moving into the warmth and humidity that will have built up in the central and northern Plains, there is the potential for widespread severe thunderstorms on Sunday,” warned AccuWeather Senior Meteorologist Jack Boston.

“Damaging winds and hail look to be the main threat, but a few tornadoes can’t be ruled out, mainly in the northern Plains,” Boston said.

Still, while residents in the Plains will have to look out and prepare to shelter from potentially damaging storms, much of the holiday weekend will remain dry with warmth and sunshine across the region.

“There will still be plenty of dry time for people to get outside and enjoy some of their holiday weekend, with social distancing of course,” Boston said.

After a cool start, warmth to build in the West

The stormy pattern affecting West so far this week will break down by this weekend, but it won’t be an immediate change.

“It’s going to be really cool and wet across most of the West through the end of this week. It will stay chilly in the Northwest, especially Montana and Idaho, through Saturday. It is even going to snow in the mountains. Yellowstone will see snow on Saturday,” said AccuWeather Senior Meteorologist Dave Samuhel.

“However, by Memorial Day itself it will turn warmer again across the Northwest, with mainly dry weather for Sunday and Monday as well.”

The exception may be the Washington coast, where a storm tracking toward British Columbia could bring some rain on Memorial Day.

Farther south, the cooler weather will ease up sooner, and heat will begin to rebuild by the end of the weekend.

“In California, temperatures will start the weekend near normal, but then build to 5-10 degrees above normal by Memorial Day,” Samuhel said.

Downtown Los Angeles could reach 90 degrees for the holiday, and temperatures in the Central Valley will near the 100-degree mark. Seasonable heat and sunshine will also be on tap across the Desert Southwest.