Two years after receiving the first new state road funds in 20 years, Michigan county road agencies have reported back on how they invested the new revenue in roads and bridges, and township matching funds for road projects.

Denise Donohue, County Road Association (CRA) of Michigan director, and Ed Noyola, CRA deputy director, today reported to the Michigan Senate Appropriations Subcommittee on Transportation that 88 percent of the new funding received so far by county road agencies has, in fact, been used to improve roads, bridges and rights-of-way.

“This survey confirms that the new dollars are going exactly where the Legislature and the public want them to go:  On the road system,” Donohue said.  “With half of the $1.2 billion package received at the close of the state’s fiscal 2018, road agencies report improving nearly 4,100 miles of local roads annually.”

“That’s up from 2,600 miles improved annually before the 2015 road funds were injected.  But when we consider there are 90,000 miles of roads under county control, it’s obvious why a second phase of road funding is needed,” Donohue said.

In its 2018 membership survey, CRA found that… 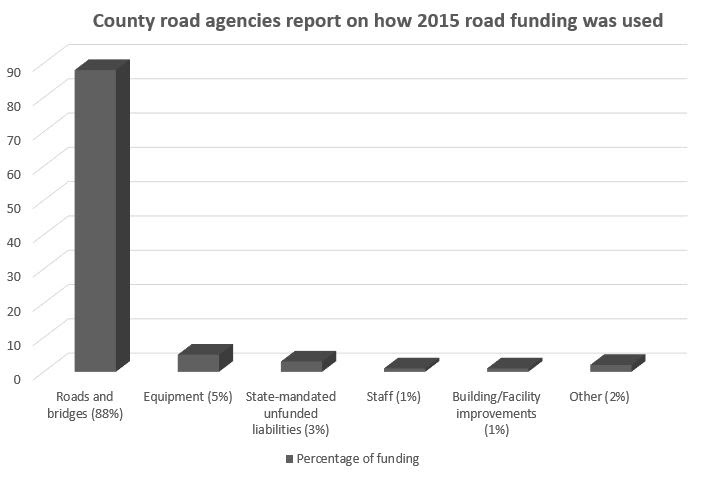 “We agree with Gov. Gretchen Whitmer’s budget proposal for roads in that the total needs are in the $2.5 billion range and growing, that the problem is urgent, that a Constitutionally-protected revenue source is needed, and that any solution should be indexed to inflation,” Donohue said.  “Certain aspects of the plan require refinement, but it is encouraging that we are all focused on restoring Michigan’s total road and bridge network.”

County road agencies also report increasing their match of township dollars, whether a stipend of matching-funds-policy is followed.

According to the Transportation Asset Management Council (TAMC), in 2017 a whopping 48 percent of Michigan’s federal-aid-eligible county roads were in “poor” condition.  Local roads that do not qualify for federal aid are usually in even worse shape.  County road agencies oversee 90,000 miles of roads, which represents about 75 percent of the roads in Michigan – and comprise the 4th-largest local road network in the US.

“County road agencies are currently conducting our own county road investment plan,” said CRA deputy director Noyola.  “While this report used to be performed under Public Act 51, the state no longer evaluates the needs on all roads but simply focuses on state trunkline needs.  We anticipate our report will be completed by summer, and it will be the first time in 35 years that Michigan has looked at the cost to maintain and improve the county-operated road network in a comprehensive manner.”

Another milestone in CRA’s report covered the Local Pavement Warranty Program, which has been adopted for all 83 county road agencies and 521 municipalities in Michigan.  It was part of the 2015 Transportation Package; CRA reported to the Senate Subcommittee that this project is now complete.  It requires every local road agency to consider adding a warranty to any road project with more than $2 million in pavement-related items, and sets out the conditions for warranting asphalt and concrete.

“While warranties won’t make sense on every road project, the fact that every Michigan local road owner will now utilize a standardized warranty is probably a first in the US,” Donohue said.  “We look forward to reporting more good results and accomplishments next year, regarding the second phase of the new 2015 road funding.”

The 83 members of the County Road Association of Michigan represent the unified voice for a safe and efficient county transportation infrastructure system in Michigan, including appropriate stewardship of the public’s right-of-way in rural and urban Michigan.  Collectively, Michigan’s county road agencies manage 75 percent of all roads in the state, including 90,000 miles of roads and 5,700 bridges. County road agencies also maintain the state’s highway system in 64 counties.