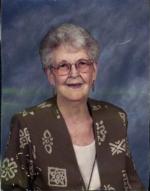 A resident of Cheboygan since 1937, moving from Grand Rapids, Sue was born April 26, 1921 in Grand Rapids, the daughter of Pearl and Bernice (Hunt). On October 19, 1940 in Cheboygan, she married John Majestic, who preceded her in death. She was very active with the Commission on Aging, serving on the board for 20 years. She was also a member of the DAV Auxiliary and the Order of the Purple Heart Association, and was a member of TOPS for 40 years.

She was preceded in death by her parents, a sister, Ruby Martin, and two brothers, Donald and Doug Hunt.

Visitation will be held on Wednesday, December 15, 2010, from 2-4pm, and 6-8pm, with a scripture service beginning at 6:30 pm, at the Nordman-Christian Funeral Home. The Funeral Mass will be celebrated on Thursday, December 16 at 1:00 pm, at St. Mary/St. Charles Catholic Church, with visitation beginning at noon at the church. Rev. Robbie Deka will officiate, burial will be at Mt. Calvary Cemetery in the spring.

Memorials may be made to Bishop Baraga School.

Online condolences may be made at www.stonefuneralhomeinc.com.